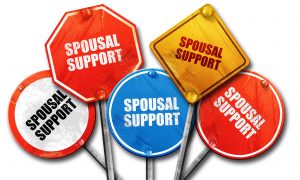 The infamous comedian-actor Robin Williams once said, “Divorce is expensive.  I used to joke they were going to call it ‘all the money,’ but they changed it to ‘alimony.’”

Alimony, or more commonly now called spousal support, may be awarded to either spouse during the pendency of a divorce proceeding, or in some cases after Judgment has been entered.  There are two types of spousal support: (1) Temporary; and (2) Permanent.

“Temporary Spousal Support,” also known as pendente lite spousal support, is spousal support ordered to be paid during the pendency of dissolution proceedings.  The purpose of temporary support is to maintain the “status quo,” or the standard of living experienced during the marriage, as close as reasonably possible during the proceedings until a final determination of the action has been made, through settlement or trial.

The amount of support of support will vary case by case.  The spouse seeking spousal support must establish their need for support by setting forth their income and expenses.  Once a need for support is established, Trial courts most often use a formula to calculate the amount of support to be paid.  This is usually done through the use of a computer program called Dissomaster, the same programed used by the Court when determining child support.

Unfortunately for some, one spouse’s need for support is not the end of the Court’s assessment.  From there, a determination must be made whether the Supporting-Spouse has the ability to pay spousal support.  The ability to pay is usually measured by the spouse’s net earnings at the time of the order.  For parties with variable income, the Court must use an income sample period that is reasonably reflective of the spouse’s income.

Other than need for support and ability to pay support, the factors set forth in Family Code section 4320, discussed further below, do not typically play a major role in setting temporary support.  The Court does have discretion in determining the amount of support though and may consider the parties’ marital standard of living when considering whether a higher or lower than the guideline (i.e. computer calculated) temporary spousal support order is appropriate.

Spousal Support orders that are ordered to be paid post entry of Judgment are known as permanent support orders.   It is not uncommon for permanent spousal support to be set lower than temporary support.  This is often due to the fact neither party will continue to have access to the marital estate as they may have during the pendency of proceedings.  However, this also varies case by case.

Courts may order one spouse to pay for the support of the other spouse, for a period of time, that the Court determines is just and reasonable, based on the standard of living established during the parties marriage, taking into consideration all of the factors identified in Family Code section 4320.  So, what are the factors?

(a) The extent to which the earning capacity of each party is sufficient to maintain the standard of living established during the marriage, taking into account all of the following:

(b) The extent to which the supported party contributed to the attainment of an education, training, a career position, or a license by the supporting party.

(d) The needs of each party based on the standard of living established during the marriage.

(e) The obligations and assets, including the separate property, of each party.

(f) The duration of the marriage.

(g) The ability of the supported party to engage in gainful employment without unduly interfering with the interests of dependent children in the custody of the party.

(h) The age and health of the parties.

(i) History of domestic violence, between the parties or perpetrated by either party against either party’s child,

(j) The immediate and specific tax consequences to each party.

(k) The balance of the hardships to each party.

(l) The goal that the supported party shall be self-supporting within a reasonable period of time. Except in the case of a marriage of long duration as described in Section 4336, a “reasonable period of time” for purposes of this section generally shall be one-half the length of the marriage. However, nothing in this section is intended to limit the court’s discretion to order support for a greater or lesser length of time, based on any of the other factors listed in this section, Section 4336, and the circumstances of the parties.

(m) The criminal conviction of an abusive spouse shall be considered in making a reduction or elimination of a spousal support award in accordance with Section 4324.5 or 4325.

(n) Any other factors the court determines are just and equitable.